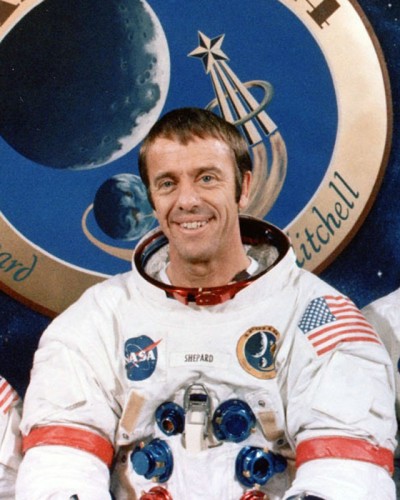 Alan B. Shepard, Jr., one of the nation’s original Mercury Seven astronauts, was the first American to fly in space and he later walked on the moon as commander of the Apollo 14 mission.

He was born in East Derry, N.H., on Nov. 18, 1923. He received a Bachelor of Science degree from the United States Naval Academy in 1944, and he has been awarded honorary degrees by Dartmouth College, Miami University (Ohio), and Franklin Pierce College.

After graduation from Annapolis, Shepard served aboard the destroyer Cogswell in the Pacific during World War II. He later entered flight training, received his wings in 1947 and served several tours aboard aircraft carriers in the Mediterranean. In 1950 he attended the Navy Test Pilot School at Patuxent River, Md., and after graduation he became a test pilot there. He subsequently was assigned to Flight Squadron 193 at Moffett Field, Calif., a night fighter unit flying Banshee jets. As operations officer of this squadron, he served aboard the carrier Oriskany in the Pacific. He returned to Patuxent as a test pilot and instructor. He later attended the Naval War College at Newport, R.I., and after graduation was assigned to the staff of the commander-in-chief, Atlantic Fleet, as aircraft readiness officer.

Shepard was selected by NASA as one of the United States’ original seven astronauts in 1959. He became the first American to rocket into space on May 5, 1961, making a 16-minute suborbital trip that took him 115 miles high and 302 miles down the Atlantic tracking range in his Freedom 7 capsule.

He later was grounded by an inner ear problem and served for several years as Chief of the Astronaut Office. An operation healed his ear problem, and on Jan. 31, 1971, he commanded the Apollo 14 mission as it embarked for the moon. He and Ed Mitchell landed their Lunar Module Antares in the moon’s Fra Mauro highlands, while Stuart Roosa orbited overhead in the Command Module Kitty Hawk. Shepard and Mitchell made two surface excursions totaling nine hours. Before entering the Lunar Module for the last time, Shepard, an avid golfer, used a makeshift club to hit two golf balls – the world’s only lunar golfer.

In August 1974, Shepard, now a rear admiral, retired from both NASA and the Navy and became chairman of Marathon Construction Corp. in Houston. He served later on the boards of several companies and was president of Seven Fourteen Enterprises Inc. (named for his two flights, Freedom 7 and Apollo 14), an umbrella company for several business enterprises. He also was a founder and president of the Astronaut Scholarship Foundation, which raises scholarship money for college science and engineering students. From 1993 until 1998, he was a Freedom Forum trustee.

Shepard died at age 74 on July 21, 1998. His wife of 53 years, Louise, died five weeks later, on August 25. Their ashes were scattered together by a Navy helicopter over Stillwater Cove in front of their home in Pebble Beach, Calif.