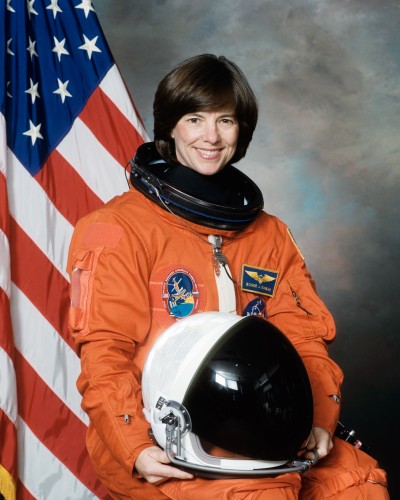 Astronaut Bonnie Dunbar, Ph.D. has received numerous honors, including NASA’s Outstanding Leadership Award in 1993 and NASA’s Exceptional Service Medal in 1998 and 1991. During her career with NASA, she served as a mission specialist and a payload commander. Dunbar logged 1,208 hours in space and her spaceflights include STS-61A, STS-32, STS-50, STS-71 and STS-89.

Dunbar’s first spaceflight, STS-61A, was on space shuttle Challenger in 1985. The payload activities of this mission were controlled from the German Space Operations Center near Munich. As a mission specialist, Dunbar was responsible for operating the German Spacelab and performing more than 75 scientific experiments. As a mission specialist on Columbia STS-32, Dunbar helped successfully deploy the Syncom IV-F5 satellite and retrieved the 21,400 pound Long Duration Exposure Facility using the remote manipulator system.

Dunbar’s achievements in space contributed to setting various benchmarks for NASA. As the payload commander on STS-50 aboard Columbia in 1992, Dunbar helped complete the first dedicated United States Microgravity Laboratory flight, which laid the groundwork for Space Station Freedom science operations. The Space Station Freedom project was originally planned to be a permanently manned Earth-orbiting space station in the 1980s, but it was never constructed or completed as designed. The Freedom project evolved into the International Space Station program.

In 1995, Dunbar flew aboard Atlantis on STS-71, the first space shuttle to dock with the Russian Space Station Mir. As a mission specialist, Dunbar assisted with the transportation of a Spacelab module in the payload bay. This mission also involved an exchange of Mir crews. The STS-71 crew performed medical evaluations on the returning Mir crew. These evaluations included ascertaining the effects of weightlessness on the cardio/vascular system, the bone/muscle system, the immune system and the cardio/pulmonary system.

On her final mission in January 1998, Dunbar served as payload commander on STS-89, the eighth Shuttle-Mir docking mission. The crew transferred more than 9,000 pounds of scientific equipment, logistical hardware and water from space shuttle Endeavour to Mir. Dunbar was responsible for all payload activities and conducted 23 technology and science experiments.

During her time with NASA, Dunbar served as assistant director at Johnson Space Center and deputy associate director for Biological Sciences and Applications. Dunbar retired from NASA in September 2005 to serve as president and chief executive officer of the Seattle Museum of Flight in Washington.