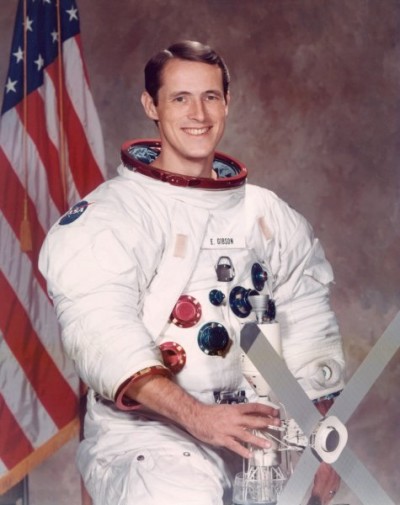 Edward G. Gibson orbited the Earth for 84 days during the final manned flight of the Skylab space station in 1973 and 1974.

While studying at Caltech, Gibson was a research assistant in the fields of jet propulsion and classical physics. He was a senior research scientist with the Applied Research Laboratories of Philco Corporation before he was selected by NASA in its first group of scientist-astronauts in June 1965.

Gibson’s first and only space assignment was as Science Pilot for Skylab 4, the third and final manned flight to the Skylab space station. He and Commander Gerald Carr and Command Module Pilot William Pogue were launched in their Apollo capsule on November 16, 1973. They docked with the large orbiting laboratory and settled in for a long stay. Carr and Pogue busied themselves with Earth resources cameras and sensors and metals processing experiments, while solar physicist Gibson concentrated on pointing six camera telescopes at the sun, stars and comet Kohoutek, whose sweep around the sun at that time was a scientific bonus. Daily medical experiments took the most time, as the spacemen gathered data on how their bodies adapted over time to their weightless environment. The astronauts took four two-man space walks, with the main goal of each to change film in the telescope cameras. On two of the excursions, they photographed Kohoutek. Gibson made three of the walks, spending a total of 15 hours 17 minutes outside the lab.

After what was then a record 84 days in space, Carr, Pogue and Gibson bade farewell to Skylab and returned to Earth February 8, 1974. They had circled the globe 1,214 times, traveled 34.5 million miles and brought back 1,718 pounds of film, data and biomedical specimens for scientific study.

Gibson became involved in analysis of the solar physics data when he left NASA later that year and became a senior staff scientist with the Aerospace Corporation of Los Angeles. In 1976 he served one year as a consultant in West Germany on the design of the Spacelab module that later flew on several Space Shuttle missions. He returned to NASA in 1977 as Chief of Scientist-Astronaut Candidates. He later was a principal with Booz, Allen and Hamilton, Inc. He currently is president of Casey Aerospace Corporation in Orlando, Florida.

Edward Gibson was inducted into the U.S. Astronaut Hall of Fame on October 4, 1997.