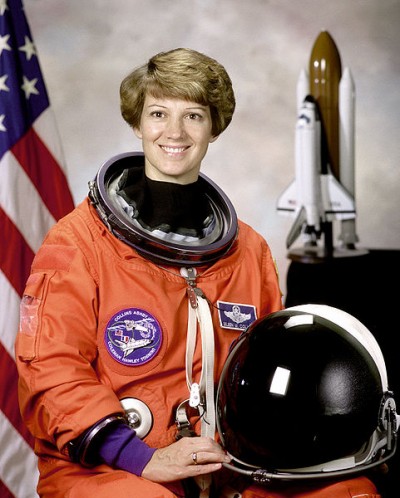 Astronaut Eileen Collins is a retired United States Air Force colonel. Revered for commanding STS-114 on the Return to Flight mission following the space shuttle Columbia accident, Collins’ career with NASA is full of accomplishments, including becoming the first woman space shuttle pilot and the first woman commander. As a four-time spaceflight veteran, Collins logged more than 872 hours in space and her missions include STS-63, STS-84, STS-93 and STS-114.

On her first spaceflight in 1995, Collins made history as she took the controls of Discovery on STS-63 and became the first female space shuttle pilot. STS-63 mission highlights in space include a rendezvous between Discovery and the Russian Space Station Mir. The crew  also performed the deployment and retrieval of an astronomy satellite and completed a spacewalk.

Collins’ second spaceflight was aboard space shuttle Atlantis on STS-84, which was the sixth Shuttle-Mir docking mission for NASA. The highlight of this mission was the transfer of the fourth U.S. crew member to the Russian space station.

In July 1999, Collins became the first woman to command a space shuttle on STS-93. The crew aboard space shuttle Columbia deployed the Chandra X-Ray Observatory, a telescope designed to conduct comprehensive studies of the universe. This telescope has enabled scientists to study exotic phenomena, such as exploding stars, quasars and black holes.

Collins commanded a shuttle for the second time in 2005 on the Return to Flight mission following the Columbia incident. The STS-114 crew docked the space shuttle at the International Space Station to test and evaluate new procedures for flight safety, shuttle inspection and repair techniques.

Collins retired from NASA in 2006 to spend more time with her family and pursue other interests. Since her retirement from NASA, Collins has worked with CNN as a space shuttle analyst, covering shuttle launches and landings.

Currently, Collins serves as an adviser to the National Space Biomedical Research Institute and as a consultant in the aerospace industry.