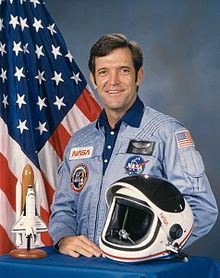 Francis R. (Dick) Scobee was the pilot on the world’s first mission to repair a satellite in orbit, in 1984, and he then was assigned to his first command – of a Challenger flight that ended tragically in 1986 in a devastating explosion that killed Scobee and six crewmates.

Scobee was born May 19, 1939, in Cle Elum, Wash., and, in 1957, at age 18, he joined the U.S. Air Force. He subsequently was assigned to Kelly AFB, Tex., where he attended night school and acquired two years of college credit, which led to his selection for the Airman’s Education and Commission Program. He graduated from the University of Arizona with a bachelor of science degree in aerospace engineering and received his Air Force commission in 1965 and his Wings a year later. He completed a number of assignments, including a combat tour in Vietnam. He later graduated from the Aerospace Research Pilot School at Edwards AFB, Calif., and took part in the testing of several aircraft.

NASA selected Scobee for astronaut training in 1978, and his first shuttle assignment was as pilot aboard Challenger, launching April 6, 1984, on a week-long journey. With Commander Robert Crippen and Scobee at the controls, the shuttle took off in pursuit of the Solar Max sun-study satellite, which had been disabled in orbit for three years. During the two-day chase, mission specialist Terry Hart used Challenger’s 50-foot robot arm to lift an 11-ton research satellite into its own orbit. The next day Challenger closed in on Solar Max, and astronauts George Nelson and James van Hoften took a space walk in an attempt to capture it and bring it into the cargo bay. But they were unsuccessful because of the failure of a capture device. The shuttle then moved to within 30 feet and Hart reached out with the robot arm, snared the satellite and brought it into the bay. Nelson and Van Hoften were outside again the next day, replacing a failed control system and faulty electronics box. The refurbished satellite was returned to orbit, to resume its study of the sun. The first shuttle service call had been successful and, during a televised news conference, the crew proudly wore T-shirts boasting “Ace Satellite Repair Co.”

Scobee was aboard Challenger again on January 28, 1986, this time as commander, with six crewmates, including America’s first “citizen in space,” Sharon Christa McAuliffe, who had been selected over 11,000 applicants in NASA’s Teacher In Space Project. The others were pilot Michael J. Smith; mission specialists Ronald E. McNair, Judith A. Resnik and Ellison S. Onizuka, and payload specialist Gregory B. Jarvis. The launch had been postponed four times by weather and technical problems, and some engineers expressed concern about a liftoff that day because of extremely low temperatures that had dipped to 25 degree that morning. But, with the countdown proceeding smoothly and with the temperature creeping toward 40 degrees, officials gave the go-ahead. “Welcome to space, guys,” Scobee remarked as the count entered the final seconds. Challenger blasted off into a clear sky at 11:38 a.m. At 58 seconds, a tongue of flame burst through a joint on one of the solid fuel booster rockets, igniting a reaction that transformed Challenger into a massive fireball 8.9 miles up after a flight of 73 seconds, killing the seven astronauts.

An investigation board concluded the direct cause was a leak in a right booster rocket joint that allowed flame to escape and listed cold weather as a contributing factor. It said the joint design was faulty, that NASA and its contractor management “first failed to recognize it as a problem, then failed to fix it and finally accepted it as an acceptable flight risk.” The shuttle fleet was grounded for 20 months for a $2.4 million overhaul. A multi-million dollar memorial was built at the Kennedy Space Center to honor the seven and other astronauts who have died in the line of duty. The Challenger crew is especially remembered in a series of Challenger Education Centers established by Scobee’s widow, June Scobee Rodgers.

Dick Scobee was inducted into the U.S. Astronaut Hall of Fame on May 1, 2004.