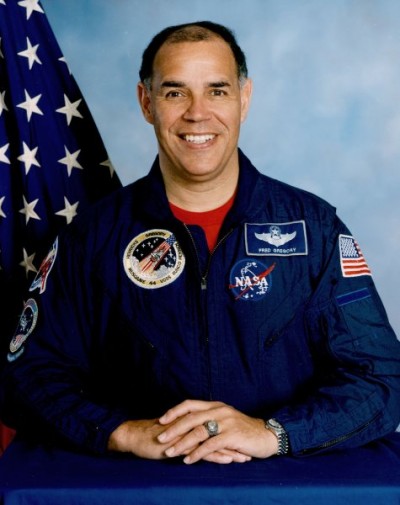 Frederick D. Gregory piloted one shuttle mission with six fellow astronauts and a messy pack of rats and monkeys and then commanded two Defense Department flights. He later shifted into management and served as NASA’s deputy administrator from 2002-2005.

He was born in Washington, D.C., in 1941, and received a Bachelor of Science degree from the U.S. Air Force Academy in 1964 and a Master’s degree in Information Sciences from George Washington University in 1977.

Following graduation from the Air Force Academy, Gregory took helicopter training, earned his wings in 1965 and served initial assignments as an H-43 helicopter rescue pilot at Vance AFB, Okla., and at Danang Air Base in Vietnam. He returned to the United States in 1967 and was assigned as a missile support helicopter pilot, flying the UH-1F at Whiteman AFB, Mo. He later re-trained as a fixed-wing pilot, flying T-38s and F-4s. Following stops at the Navy Test Pilot School, Patuxent River, Md., and at Wright Patterson AFB, Ohio, he was detailed in 1974 as a research test pilot at NASA’s Langley Research Center in Virginia. Four years later, NASA selected him for astronaut training.

Gregory’s first space assignment was as pilot of Space Shuttle Challenger, which soared into orbit in 1985 with a crew of seven and the European Spacelab, a pressurized 23-foot laboratory positioned in the cargo bay. The crew had plenty of company – 24 rats and two squirrel monkeys who were to become real nuisances. They were along to test cages designed for future animal research projects in space. The astronauts learned early on that the cages were not adequate. Every time they changed the food trays, foul-smelling particles of food and feces spewed out and floated weightless in the laboratory, eventually drifting through a connecting tunnel into the cockpit. Mission Control worked out a procedure to halt the outflow. The astronauts, wearing surgical masks, slipped small plastic bags over the trays before extracting them and used a small vacuum cleaner to sweep up any particles that escaped.

With that problem resolved, the crew concentrated on the many science, technology and research experiments packed into the Spacelab. They worked around-the-clock in shifts, observing the animals’ behavior in weightlessness; photographing auroras and other astronomical phenomena; growing crystals in solution to study the dynamics of water, glycerin and silicone droplets in zero-G, and spinning out a small satellite to aid air traffic controllers. They returned to Earth after seven days aloft.

On November 22, 1989, Gregory guided Space Shuttle Discovery into orbit with four other astronauts. Because it was a Defense Department mission, most information was blacked out, just as it was on four earlier military shuttle flights. On the second day, Thanksgiving Day, the crew reportedly deployed a two and one-half-ton, $300-million Signal Intelligence satellite intended to monitor military communications in much of the world. Then the astronauts enjoyed a Thanksgiving meal of irradiated turkey and freeze-dried vegetables.

Gregory again commanded a Defense Department mission with the 1991 launch of Atlantis with a crew of six. While secrecy was not as tight as on earlier military flights, there were some aspects that official kept quiet about. The astronauts successfully released a Defense Support Program satellite and worked on a number of secondary payloads, including a Military Man In Space experiment designed to assess the ability of a spaceborne observer to collect information about ground troops, tanks, planes and other equipment and facilities.