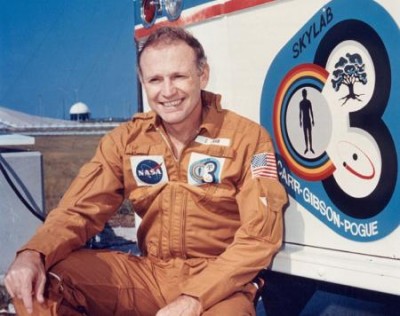 Carr joined the Navy in 1949, became a Navy F6F plane captain, and a year later was appointed a midshipman and enrolled in the University of Southern California NROTC program. Upon graduation, he received his commission and attended the U.S. Marine Corps Officers’ Basic School in Quantico, Virginia. He received flight training at Pensacola, Florida, and Kingsville, Texas, and was then assigned to Marine All-Weather-Fighter- Squadron 114, flying the F-9 and F-6 in the U.S. and the Mediterranean. After postgraduate training he served with Marine All-Weather-Fighter-Squadron 122, piloting the F-8 Crusader in the U.S. and the Far East. When NASA selected him as one of 19 new astronauts in April 1966, he was a test conductor with Marine Air Control Squadron Three flying the F-4 Phantom.

His first and only space assignment was to command Skylab 4, the third and final manned flight to the Skylab space station. He and Command Module Pilot William Pogue and Science Pilot Edward Gibson were launched in their Apollo capsule on November 16, 1973. They linked up with the orbiting laboratory and settled in for a long stay. Carr and Pogue busied themselves with Earth Resources cameras and sensors and metals processing experiments. Gibson, a solar physicist, concentrated on pointing six camera telescopes at the sun, stars and the comet Kohoutek, whose sweep around the sun at that time was a scientific bonus. The astronauts took four two-man space walks, with the main goal of each to change film in the telescope cameras and to repair malfunctioning outside equipment. On two of the excursions, they photographed the comet. Carr made three of the walks, totaling 15 hours 48 minutes outside the lab.

After what was then a record 84 days in space, Carr, Pogue and Gibson bid farewell to Skylab and returned to Earth on February 8, 1974. They had circled the globe 1,214 times, traveled 34.5 million miles and brought back 1,718 pounds of film, data and biomedical specimens for scientific study.

Carr retired from the Marine Corps as a colonel in 1975 and from NASA in 1977 after working in the Astronaut Office. He currently is vice president of CAMUS, Inc., of Manchester Center, Vermont and is involved as an associate designer and fabricator of wall-hung and free standing sculpture with his wife, Pat Musick.  He lectures on aerospace human factors engineering and on the incredible experience of space flight.

Gerald Carr was inducted into the U.S. Astronaut Hall of Fame on October 4, 1997.