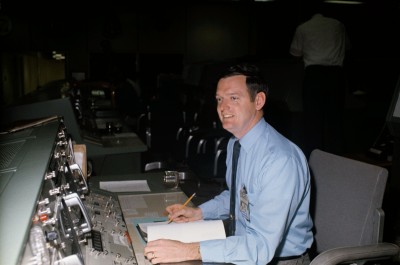 Glynn Lunney served as an MCC Flight Director during Gemini and Apollo, including many of those landmark flights and most of the Apollo manned flights up through Apollo XV. Lunney had pivotal roles in the Apollo flight campaign to establish readiness for the eventual lunar landing and, in particular, for the rescue of Apollo XIII.

Born on November 27, 1936 the coal mining region of Taylor, Pa. He went to Scranton Prep high school and then to the University of Scranton. He then co-oped his last three years at the University of Detroit, earning his BS in Aeronautical Engineering and satisfying his hands-on work quarters at the Lewis Research Center in Cleveland, Ohio.  In June 1958 and during his first month after graduation, he saw his first drawing of what became the Mercury spacecraft. And, when asked, he jumped at the chance to join the Space Task Group ( STG  ) at Hampton, Virginia to work on the Mercury project and respond to the challenge of Sputnik of 8 months ago.  Lunney moved there in 1959 and then STG moved again to become the Manned Spacecraft Center in Houston, Texas in 1962.

Mercury was an accelerated learning process in how to design, monitor and control the trajectory of an Atlas on the way to orbit and returning safely.  His first console work in that discipline was at the  Bermuda tracking station and that lead to the position of Flight Dynamics Officer in the Mercury Control Center in Florida after the John Glenn flight in February, 1962. This soon expanded to a the role of Branch Chief to prepare  more flight controllers for the new challenges of the trajectory  discipline for Gemini and Apollo. Along with that role, Lunney was also selected to become a Flight Director in 1964 at age 27, later became Chief of the Flight Directors Office.

This was the time when the operations team of mission planners, the flight controllers and the flight crews  built their experience and confidence on Gemini in the new Mission Control Center in Houston. This lead to the very rapid sequence of 5 manned Apollo flights to accomplish the lunar landing goal in July, 1969 with  Apollo XI. He felt that his performance on Apollo XIII was the best of his career, coming on duty about an hour after the explosion and directing the fashioning of the return-home strategy of propulsive maneuvers,  the management of all the critical consumable resources and the many configuration decisions. He is very proud of the Medal of Freedom, awarded by the President to the entire Mission  Operations team.

Lunney then began his career in program management with the Apollo ships for crew transport to and from Skylab, as US Program Manager of  Apollo/Soyuz Test Project, the planning for the utilization of the Shuttle to serve the needs of the customers and as Program Manager of the Space Shuttle for 4 years into 1985.

At that point, he left Government service and worked for Rockwell as the General Manager of the GPS line, then the space station and back to Shuttle. This lead to the United Space Alliance and the move to turn operations over to Industry. In his second retirement, he continues to support the people at work in the human space programs of today.