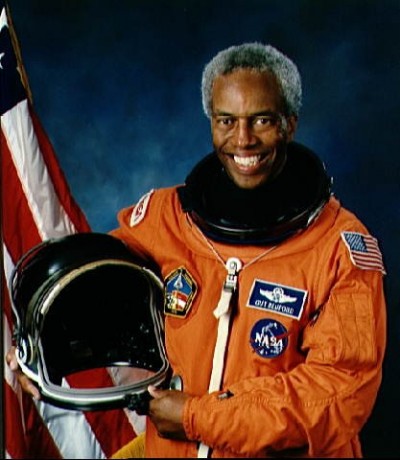 After graduating from Penn State, Bluford earned his Air Force pilot wings and then flew 144 combat missions in Southeast Asia as an F4C fighter pilot. From 1967 to 1972, he served as a T-38 instructor pilot at Sheppard Air Force Base in Texas.

After graduating from the Air Force Institute of Technology in 1974, he was assigned to the Air Force Flight Dynamics Laboratory as deputy for advanced concepts for the Aeromechanics Division and then as branch chief of the Aerodynamics and Airframe Branch until his selection to the astronaut program in 1978.

Bluford flew as a mission specialist and flight engineer aboard STS-8, on the first night launch and landing of the Space Shuttle. He assisted the commander and pilot in developing techniques for night time operations. He also deployed the Indian National Satellite and operated the Continuous Flow Electrophoresis System.

In 1985, Bluford flew as a mission specialist on STS-61A, and led the international on-orbit payload team in the training and on-orbit operations of 76 experiments in the German D-1 Spacelab.

In 1991, Bluford flew on STS-39, managing the operation of several experiments in support of the DOD Strategic Defense Initiative Office and then flew in 1992 on STS-53, a classified Space Shuttle flight

Bluford has served on numerous boards including the American Institute of Aeronautics and Astronautics (AIAA), the National Research Council’s Aeronautics and Space Engineering Board, the Aerospace Corporation, and the Space Foundation. He is currently the President of the Aerospace Technology Group, in Cleveland Ohio.

Guion Bluford was inducted into the U.S. Astronaut Hall of Fame on June 5, 2010.