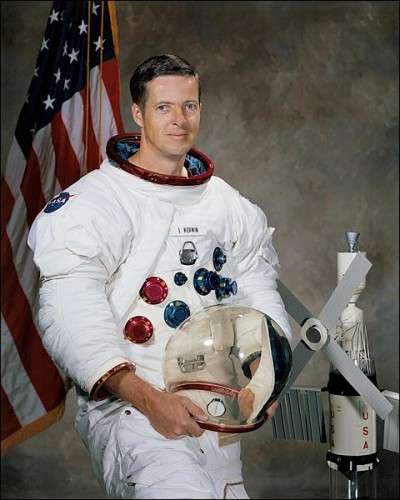 Joe Kerwin has an M.D. degree from Northwestern University, and served as a U.S. Navy Flight Surgeon and Naval Aviator for seven years before becoming a scientist-astronaut in 1965. He flew as Science Pilot on the first Skylab mission, spending a month in space in 1973. After Skylab he served in various NASA management positions, including NASA Representative in Australia (1982-83) and Director of Space and Life Sciences at the Johnson Space Center (1984-87.) He retired from the Navy, left NASA  and joined Lockheed in 1987.

At Lockheed he managed the Extravehicular Systems Project, providing hardware for Space Station Freedom, from 1988 to 1990; with two other Lockheed employees he invented the Simplified Aid for EVA Rescue (SAFER), currently used by space walking astronauts on the International Space Station (ISS). He then served on the Assured Crew Return Vehicle team, and served as Study Manager on the Human Transportation Study, a NASA review of future space transportation architectures. In 1994-95 he led the Houston liaison group for Lockheed Martin’s FGB contract, the procurement of the Russian “space tug” which has become the first element of the International Space Station.

Kerwin joined Systems Research Laboratories in June, 1996, to serve as Program Manager of the team which bid to win the Medical Support and Integration Contract at the Johnson Space Center. The incumbent, KRUG Life Sciences, was selected. Then KRUG recruited Kerwin to replace its retiring President, T. Wayne Holt. He joined KRUG on April 1, 1997.

On March 16, 1998, KRUG Life Sciences became the Life Sciences Special Business Unit of Wyle Laboratories of El Segundo, California. Kerwin continued to lead the unit as Senior Vice President of Wyle. In 2003, Wyle was awarded the ten-year, billion-dollar Bioastronautics contract by NASA to manage its future medical work in support of human space flight. He managed that program until July, 2004, when he retired.

In addition to his duties at Wyle, Kerwin served on the Board of Directors of the National Space Biomedical Research Institute (NSBRI) as an Industry representative until retirement. He now serves on its User Panel. He is also an Adjunct Professor of Space medicine at the University of Texas Medical Branch (UTMB), and an Adjunct Professor of Physiology at the Texas A&M University College of Veterinary Medicine.

Kerwin is married, and has three daughters and five grandsons.