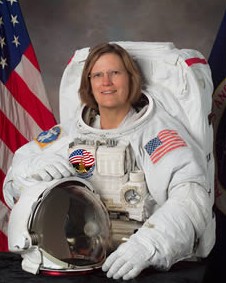 Floating effortlessly in weightlessness, Kathryn Sullivan glided into Challenger’s open cargo bay in 1984 as the first American woman to walk in space. On two later missions, she helped launch the Hubble Space Telescope and made an extensive study of earth’s resources.

Sullivan was born October 3, 1951, in Paterson, N.J., and received a bachelor of science degree in earth resources from the University of California, Santa Cruz, in 1973; spent a year as an exchange student at Norway’s University of Bergen, and earned a doctorate in geology from Dalhousie University, Halifax, Nova Scotia, in 1978. Her doctoral studies at Dalhousie included participation in several oceanographic experiments with the U.S. Geological Survey and Wood’s Hole Oceanographic Institute. NASA selected her as an astronaut candidate in 1978, and on earning her wings, she concentrated on remote sensing research.

Her first shuttle assignment was as a mission specialist aboard Challenger, which lifted off October 5, 1984, with seven astronauts, the largest shuttle crew yet. Sullivan was America’s third female astronaut; one of her crewmates was Sally Ride, who was the first, a year earlier. On the sixth day, Sullivan became the United States’ first woman space-walker when she and David Leetsma slipped into the cargo bay to practice techniques for refueling out-of-gas orbiting satellites. “This is great; I love it,” she exalted as she and her male colleague worked at the end of 50-foot tethers, installing a valve on a tank of volatile hydrazine fuel and running a hose from the valve to another tank. The next day, working inside Challenger’s cabin, they remotely transferred 134 pounds of hydrazine between the tanks, proving refueling was possible.

The primary goal of the journey was a survey of the earth, the atmosphere and the oceans. Using the shuttle’s robot arm, the crew dropped overboard an Earth Radiation Budget Satellite to measure the amount of energy the globe receives from the sun and the amount radiated back into space. Another experiment measured the amount of air pollution which escaped earth’s atmosphere. Sullivan’s oceanographic training came into play as several visual and photographic observations were made of ocean phenomena.

On her second flight in 1990, Sullivan was a mission specialist aboard Discovery and she helped release the Hubble Space Telescope, intended to provide astronomers with their clearest view yet of happenings in deep space. There were some initial problems with the telescope, but, after a subsequent shuttle repair mission, the payload became a phenomenal success in opening a window on the universe. The crew also operated several science and photographic experiments. On her third and final mission in 1992, Sullivan was payload commander on Atlantis, which carried the Spacelab research laboratory in its cargo bay on NASA’s first Mission to Planet Earth. The crew conducted 12 experiments in another study of the earth, its atmosphere and its oceans, giving Sullivan another opportunity to employ her knowledge of the oceans.

Kathryn Sullivan was inducted into the U.S. Astronaut Hall of Fame on May 1, 2004.