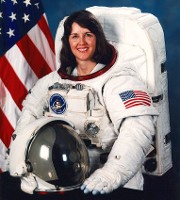 Thornton flew four Space Shuttle missions during her 12 years in the astronaut corps. During her second flight, she served as mission specialist and Intra Vehicular Activity crewmember for the first and only three-person spacewalk in May 1992.

Thornton first flew as mission specialist aboard the Department of Defense STS-33 mission in November 1989, and again in 1992 aboard the maiden flight of Space Shuttle Endeavour, STS-49.

From October 20 to November 5, 1995, Thornton also served aboard Space Shuttle Columbia on STS-73 as the payload commander of the second United States Microgravity Laboratory mission.

Thornton has served on several influential boards and councils including the Mars Program Independent Assessment Team, the Stafford-Covey Return to Flight Task Group, and the National Research Council Aeronautics & Space Engineering Board and the Board of Visitors of the U.S. Air Force Air University. She has also co-authored an elementary science textbook series in partnership with NASA. Currently, she serves as the Associate Dean for Graduate Programs in the University of Virginia School of Engineering and Applied Science.

Kathryn Thornton was inducted into the U.S. Astronaut Hall of Fame on June 5, 2010.