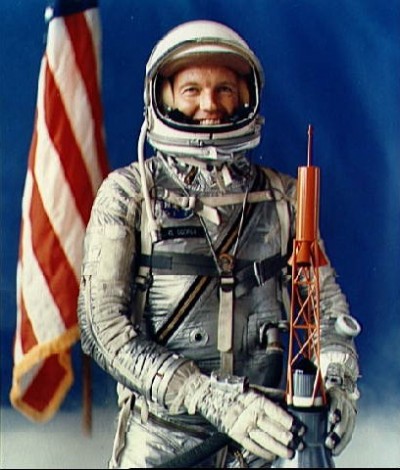 He was born in Shawnee, Okla., on March 6, 1927. He received a Bachelor of Science degree in Aeronautical Engineering from the Air Force Institute of Technology in 1956 and an honorary Doctorate of Science degree from Oklahoma City University in 1967.

Cooper received an Army commission after completing three years of the University of Hawaii. He transferred his commission to the Air Force and was placed on active duty by that service in 1949 and given flight training. Following training he was assigned to the 86th Fighter Bomb Group in Munich, Germany, where he flew F-84 and F-86 jets for four years. He returned to the United States and after two years of study at the Air Force Institute of Technology received his degree. He attended the Air Force Experimental Flight Test School at Edwards Air Force Base, Calif., and upon graduating in 1957, was assigned as an aeronautical engineer and test pilot in the Performance Engineering Branch of the Flight Test Division at Edwards.

Cooper was selected by NASA in 1959 as one of the original seven Mercury astronauts. On May 15-16, 1963, he piloted his Faith 7 capsule on the sixth and final Project Mercury mission. Cooper tested the Mercury craft to its limits on a 22-orbit, 34-hour flight. Electrical problems near the end of the mission meant he had to manually fire his retrorockets and steer the capsule through re-entry. Problems also beset Cooper on his next flight, a then-record eight-day trip aboard Gemini 5, flying with Charles Conrad, in August 1965. There was trouble with fuel supplies, power systems and a computer-generated command that caused Gemini 5 to land 103 miles short of its landing target. But Cooper and Conrad demonstrated that astronauts could resolve problems and they stayed aloft the full duration.

Cooper, an Air Force colonel, retired from NASA and the Air Force in 1970. He was later involved in technical research with several companies and served as the chief executive officer of Galaxy Group, Inc., of Van Nuys, Calif., an engineering design group engaged in modifying existing aircraft and designing and manufacturing new aircraft.