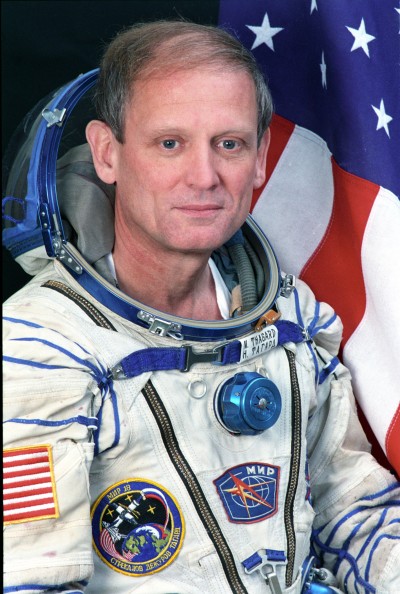 Thagard was born in 1943 in Marianna, FL. He received bachelor and master of science degrees from Florida State University in 1965 and 1966, and earned a doctor of medicine degree from the University of Texas Southwestern Medical School in 1977.

In 1966 he entered active duty with the U.S. Marine Corps Reserve and became a naval aviator in 1968. He flew 163 F-4 combat missions in Vietnam in 1969-1970. He earned his medical degree and was interning at the Medical University of South Carolina when he was selected by NASA for astronaut training in 1978.

Thagard first flew on the second flight of Challenger, launched with a crew of five in June, 1983. The astronauts deployed three satellites and performed a number of science experiments. Thagard used his medical skills to collect data on physiological changes associated with astronaut adaptation to weightlessness. Thagard again was aboard Challenger in April, 1985, for a week of research in the Space-Lab 3 module anchored in the cargo bay. Thagard was involved in several medical experiments and helped monitor the health of 24 rats and two squirrel monkeys who were aboard in cages.

Thagard’s next assignment was aboard Atlantis in May, 1989, on a four-day mission during which a planetary probe for the first time was launched from a shuttle. The crew deployed the Magellan-Venus spacecraft to Venus to map that planet’s surface with radar instruments. The astronauts also worked with experiments involving fluid research, chemistry and electrical storm studies. Thagard’s final shuttle flight was aboard Discovery, launched in January, 1992, with a crew of eight on an eight-day mission during which 55 major experiments were conducted in the Microgravity Laboratory-1 module berthed in the cargo bay. The experiments provided by investigators from 11 countries concentrated on the effects of microgravity on materials processing and life sciences. Thagard was the payload commander.

On March 14, 1995, Thagard was the first American astronaut to blast off in a Soyuz spacecraft from Russia’s Baikonur Cosmodrome for a flight to the Mir space station. Thagard was frustrated at first because the arrival of his experiments at the station was delayed for two months, until June, because of problems launching an unmanned Russian cargo ship. Once the ship docked, Thagard worked on a total of 28 experiments, finally returning to earth after 115 days in shuttle Atlantis, which had rendezvoused with Mir for a crew exchange.

Following this flight, Thagard resigned from NASA to teach at the Florida State University. Currently, he is an Associate Dean of the FAMU-FSC College of Engineering.

Norman Thagard was inducted into the U.S. Astronaut Hall of Fame on May 1, 2004.