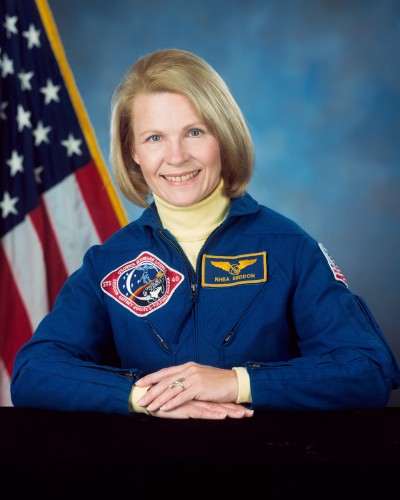 M. Rhea Seddon M.D. was selected by NASA in January 1978 and became an astronaut in August 1979 as part of the first U.S. astronaut class to include women. A three-flight veteran, she has logged over 722 hours in space.

Seddon lifted off aboard Discovery on her first mission, STS-51D, on April 12, 1985. As Mission Specialist, she performed numerous science and medical experiments, including two “Getaway Specials,” the Toys in Space demonstration, and the first ultrasound of a human heart in space. The crew deployed two satellites, Telesat-I and Syncom IV-3. The malfunction of the latter resulted in Seddon using the Remote Manipulator System (RMS) to engage the satellite’s start lever in an attempt to activate the satellite.

She returned to space on June 5, 1991 on STS-40 Columbia, again serving as Mission Specialist. This mission, the first Spacelab Life Sciences flight (SLS-1), saw the crew performing numerous experiments which explored how humans, animals, and cells respond to microgravity and re-adapt to Earth’s gravity upon return. Other payloads included experiments designed to investigate materials science, plant biology and cosmic radiation, and tests of hardware proposed for the Space Station Freedom Health Maintenance Facility.

As Payload Commander on her third and final flight, STS-58, which launched October 18, 1993, Seddon was in charge of all science activities aboard Columbia. This Spacelab Life Sciences mission (SLS-2) received NASA management recognition as the most successful and efficient Spacelab flown to date. During the flight, 650 samples were collected from the crew and 48 rodents to help build a more comprehensive picture of how humans and animals adapt to zero-gravity. In addition, the crew performed engineering tests and Extended Duration Orbiter Medical Project experiments.

During her time at NASA, Seddon worked in a variety of areas: she led the planning of, and served as a helicopter physician for operations with the Search and Rescue forces and NASA for the first four shuttle flights; helped develop the medical kit and checklist, shuttle food systems, crew medical officer training and life sciences experiment plans for the shuttle program; made major contributions to Challenger accident investigations; represented the Astronaut Office on the NASA Aerospace Advisory Committee and Bioethics Task Force; served as CAPCOM; and more.

After leaving NASA in 1997, Dr. Seddon served as the Assistant Chief Medical Officer of the Vanderbilt Medical Group in Nashville for 11 years. There she led an initiative aimed at improving patient safety, quality of care, and team effectiveness by the use of an aviation-based model of Crew Resource Management. Now with LifeWings Partners, LLC, she teaches this concept to healthcare institutions across the United States. Recently, she has written a memoir, entitled “Go for Orbit,” to inspire young women to pursue careers in science and technology.