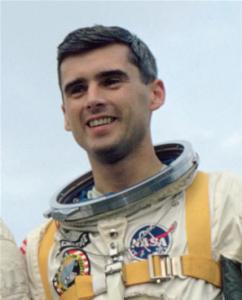 Roger B. Chaffee was selected by NASA to fly on the first manned mission of the Apollo spacecraft, but he never had a chance to make the Earth orbit flight. On January 27, 1967, he and crewmates Gus Grissom and Edward H. White II died tragically in their spacecraft during a launch pad test at the Kennedy Space Center.

Chaffee was born February 15, 1935, in Grand Rapids, Mich. He received a Bachelor of Science degree in aeronautical engineering from Purdue University in 1957 and immediately joined the Navy. He achieved the rank of lieutenant commander while serving as safety and quality control officer for Heavy Photographic Squadron 62 at the Naval Air Station in Jacksonville, FL.

During the Cuban missile crisis in October 1963, Chaffee piloted a U2 spy plane that snapped photos which proved conclusively that the Soviet Union had installed offensive missiles in Cuba. In explaining his position to blockade Cuba and challenge the Soviets on the issue, President John F. Kennedy displayed some of Chaffee’s photos to the world in a televised address.

That same month, NASA selected Chaffee as a member of its third group of astronauts. He was assigned with veteran Commander Gus Grissom and Edward H. White II, America’s first space-walker, to fly the first Apollo capsule on an 11-day Earth orbit trip. A month before their scheduled launch, on January 27, 1967, the three were aboard their capsule, conducting a countdown rehearsal on the launch pad, when a flash fire raced through their cabin, killing all three.

Investigation determined their were many serious design flaws with the Apollo craft, and it was completely redesigned. NASA officials and fellow astronauts have said often that the tragic sacrifice of Grissom, White and Chaffee made it possible for Americans to walk on the moon.

Roger Chaffee was inducted into the U.S. Astronaut Hall of Fame on October 4, 1997.