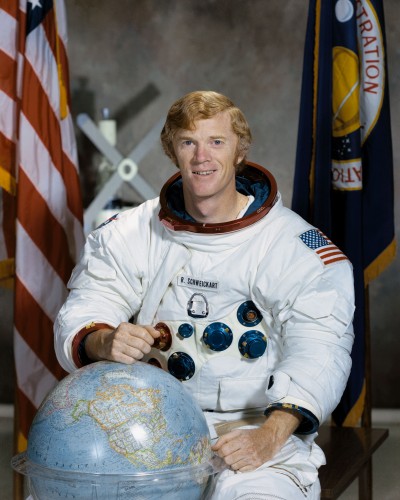 Rusty Schweickart became an astronaut in 1963 in the third group selected by NASA.  He flew on Apollo 9 as the Lunar Module Pilot and was the first to step outside a spacecraft without a life support umbilical to the spacecraft.  His 10-day mission in Earth orbit in 1969 was the initial checkout of the Lunar Module, the self contained backpack (PLSS) and the rendezvous techniques used on the later lunar landing missions.

Schweickart also served as the back-up commander of the first Skylab mission.  He received NASA’s Exceptional Service Medal for his leading role in saving the mission after its thermal shield/meteor bumper ripped off during launch.

From 1977 to 1985 Schweickart served in California state government, first as Assistant to Governor Jerry Brown for Science and Technology and subsequently as Commissioner of Energy.  Schweickart Chaired the California Energy Commission from 1979 to 1984.

Schweickart was the founder and president of the Association of Space Explorers (ASE), the professional organization of astronauts and cosmonauts from around the world.  He established and chaired the Association’s Committee on NEOs from 2005-2009.

From 2001 through 2010 Schweickart was founder and Chairman of the Board of the B612 Foundation, a non-profit foundation dedicated to developing and demonstrating the capability to deflect asteroids from Earth impact.  He is currently Chairman Emeritus of the organization.

In 2010 Schweickart served as Co-chairman of the NASA Advisory Council’s Task Force on Planetary Defense.

Schweickart holds BS and MS degrees from MIT and has been a USAF fighter pilot, astronaut, government executive and corporate CEO.  He is retired and lives in Sonoma, California.