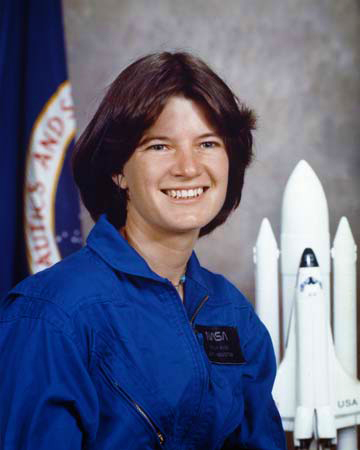 After dispatching 82 men into space in 22 years, America sent a woman — Sally K. Ride — into orbit on the seventh Space Shuttle mission, the second for Challenger, which got off to a roaring start June 19, 1983, on a satellite-deploy mission. Sixteen months later, Ride again was in orbit, also aboard Challenger, on a flight to explore the earth, its oceans and its atmosphere.

Ride was born in 1951 in Los Angeles and received master of science and doctorate degrees in physics from Stanford University in 1975 and 1978. She was conducting research work at Stanford in 1978 when NASA selected her and five other women as its first female astronaut candidates. After a one-year training and evaluation program, she became eligible to serve as a Shuttle mission specialist.

She was chosen as the first of the women to fly in space, and on her first mission, the five-person crew released commercial communications satellites for Canada and Indonesia, and operated the 50-foot robot arm to deploy, fly in formation with and recover a test satellite. The astronauts also conducted several science experiments.

An extensive survey of the earth was the main goal when Ride and six other astronauts rode Challenger into orbit October 5, 1984. During eight days in space, Ride operated the remote arm to release into a separate orbit an Earth Radiation Budget satellite to measure the amount of energy the globe receives from the sun and the amount radiated back into space in a study aimed at a better understanding of climate and weather. She and the other crew members also photographed parts of every continent with a large terrain mapping camera; measured the amount of air pollution which escaped earth’s atmosphere, and made visual and photographic observations of ocean phenomena.

Ride was training for a third space mission on January 26, 1986, when Challenger exploded shortly after launching, killing all seven crew members. She terminated training and was assigned to the Presidential Commission probing the causes of the accident. Following the investigation, she was assigned to NASA Headquarters as special assistant to the administrator for long range and strategic planning. She left NASA in 1987 to become a Science Fellow at the Stanford University Center for International Security and Arms Control and later served as Director of the California Space Institute, a research institute at the University of California.

In 2001 Ride established the Sally Ride Science Club in San Diego, which is the centerpiece for Imaginary Lines, Inc., which encourages elementary- and middle-school girls to pursue careers in math and science.