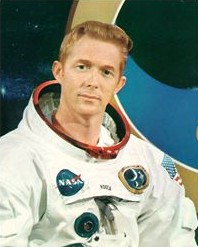 Stuart A. Roosa orbited the moon as Apollo 14 Command Module pilot in 1971 while crewmates Alan B. Shepard and Edgar D. Mitchell explored the surface.

Roosa was born August 16, 1933, in Durango, Colorado. He received a Bachelor of Science with honors in aeronautical engineering from the University of Colorado, under the U.S. Air Force Institute of Technology Program.

Roosa was one of 19 astronauts selected by NASA in April 1966. His only space flight was Apollo 14, January 31 to February 9, 1971. His crewmates were Commander Alan Shepard and Lunar Module pilot Edgar Mitchell. Enroute to the moon, Roosa, as Command Module pilot, had difficulty docking his command ship “Kitty Hawk” with the moon ship “Antares.” Roosa’s skillful flying finally succeeded in linking the two ships. On February 5, Shepard and Mitchell landed “Antares” in the lunar Fra Mauro highlands, and for more than 35 hours Roosa orbited the moon alone while awaiting their return for the safe journey back to Earth.

Stuart Roosa was inducted into the U.S. Astronaut Hall of Fame on October 4, 1997.