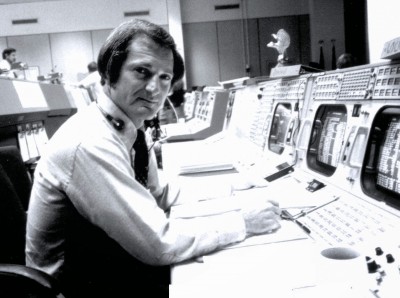 Sy Liebergot, Apollo Mission Flight Controller, author and retrospective space history lecturer, shares his personal experiences in Mission Control during the nearly fatal Apollo 13 mission to the Moon through his many lectures and in his autobiography.

Viewers of the Oscar winning movie, Apollo 13 will remember Sy Liebergot as a central character, portrayed by Clint Howard, in that amazing story.

Liebergot, sitting at the EECOM (electrical, environmental, sequential systems engineer) console at Mission Control, Johnson Space Center, Houston, was responsible for making the call that ended Apollo 13’s mission to the moon’s surface and started the fight for survival.

After graduating from California State University at Los Angeles with a degree in Electrical Engineering, Sy began his engineering career with North American Aviation, in Downey, CA, at the very inception of the Apollo lunar program. Soon after moving to Houston, Texas, Sy switched over to NASA to qualify for a “front room” flight controller position in the Mission Control Center in order to “get in on the action.”

He cut his flight controller teeth on the Apollo pathfinder flight of Apollo AS-201, then became a veteran flight controller of many flights serving as Operations and Procedures Officer on AS-202, as Assistant Flight Director On AS-501 (the first Saturn V launch), and as Lead EECOM Flight Controller throughout all Apollo manned missions and an EGIL (Skylab EECOM) for all of the Skylab program missions. On the international scene, Sy was the Lead EECOM for the American-Russian Apollo-Soyuz Test Project (ASTP) mission. He contributed his experience to early shuttle missions and to the space station design. As a Senior Project Engineer, he directed the design and fabrication of the astronaut neutral buoyancy trainers for the International Space Station (ISS).

As EECOM in Mission Control on Apollo 13, Sy was at the focal point of the crisis when the spacecraft oxygen tank exploded. He has advised and contributed to several books concerning Apollo 13 including the movie, Apollo 13; and was the technical adviser for an archival multi-media CD-ROM entitled Apollo 13, A Race Against Time, which is devoted to the Apollo 13 mission. He has appeared in many TV documentaries, including the PBS NOVA series, the History Channel Modern Marvels, and the acclaimed Public Broadcast System documentary Apollo 13, To the Edge and Back. He served as the on-camera host for a space documentary entitled In the Shadow of the Moon, produced by the CBS affiliate in Austin, Texas. His autobiography entitled Apollo EECOM: Journey of a Lifetime has been published.

As part of the Apollo 13 Operations Team, Sy was awarded the Presidential Medal of Freedom. He also received the NASA Commendation Award for his leadership role in the Apollo-Soyuz Test Project international space mission. He has also been honored as Distinguished Alumnus of his alma mater’s School of Engineering and Technology. The Space Frontier Foundation presented the Hero of the Moon award to him at the 2005 Return To The Moon Conference. Recently, Sy was a co-recipient of the coveted Silver Telly award for the 2005 Museum of Flight Gala production.

He remains an active booster and international public speaker of NASA’s space accomplishments and the importance of a good education. He lives in Pearland, Texas with his wife, Craig.