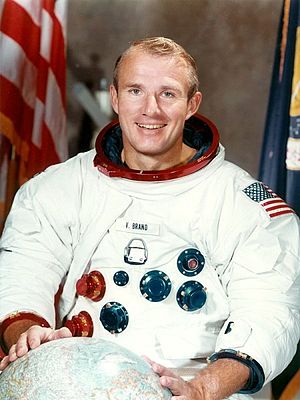 Vance D. Brand was Command Module Pilot on the 1975 Apollo-Soyuz Test Project, the first linkup in orbit between spaceships of the United States and Soviet Union, and he later commanded three Space Shuttle missions.

Brand was a commissioned officer and aviator with the U.S. Marine Corps from 1953 to 1957. Assignments included a 15-month tour in Japan as a jet fighter pilot. Following release from active duty, he continued in Marine Corps Reserve and Air National Guard jet squadrons until 1964. From 1960 to 1966, he was employed with Lockheed Aircraft Corporation, working initially on the Navy’s P3A aircraft. While with Lockheed, he graduated from the U.S. Naval Test Pilot School in 1963 and was assigned as an experimental test pilot on Canadian and German F-104 programs. When selected by NASA as an astronaut in April 1966, he was working at the West German F-104G Flight Test Center at Istres, France, as an experimental test pilot and leader of a Lockheed flight test advisory group.

Brand was launched on his first space flight July 15, 1975, as Command Module Pilot on the Apollo spacecraft that hooked up in orbit with a Soviet Soyuz vehicle. With Brand were Commander Tom Stafford and Docking Module Pilot Deke Slayton. Aboard Soyuz were cosmonauts Alexei Leonov and Valery Kubasov. The two crews conducted numerous experiments, shared meals and exchanged gifts during the four days they were together. The Apollo astronauts were nearly overcome by gaseous fumes that leaked into their capsule during return to Earth on July 25, but they quickly recovered.

Brand returned to space on November 11, 1982, as commander of the fifth flight of Columbia and the first operational mission of the Space Shuttle fleet. Brand, Pilot Robert Overmyer and Mission Specialists Joseph Allen and William Lenoir successfully deployed two commercial communications satellites from the cargo bay. Brand again was in command, this time of Challenger, when the 10th shuttle flight lifted off February 3, 1984. The crew included Pilot Robert Gibson and Mission Specialists Bruce McCandless, Ronald McNair and Robert Stewart. They deployed two Hughes communications satellites which failed to reach desired stationary orbit because their upper stage rockets failed. McCandless and Stewart each performed the first tetherless space walks, using the Manned Maneuvering Unit to move through space. Brand was back aboard Columbia for his third shuttle command on December 2, 1990. During the nine-day flight, the first dedicated to astronomy, the seven-man crew worked in round-the-clock shifts, observing stars and other celestial objects.

In 1992, Brand left the astronaut corps and accepted a NASA assignment as director of plans for the X-30 National Aerospace Plane Joint Program Office at Wright-Patterson AFB, Ohio.

Vance Brand was inducted into the U.S. Astronaut Hall of Fame on October 4, 1997. He currently serves on the Astronaut Scholarship Foundation’s Board of Directors.