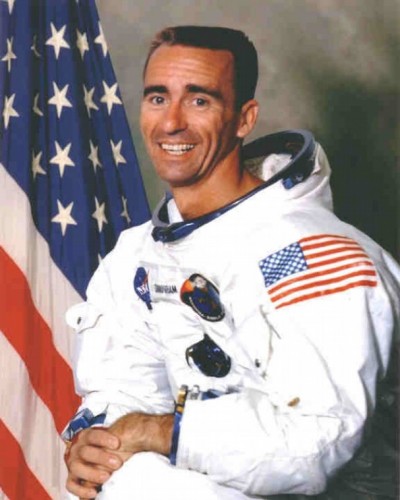 Walter Cunningham, a member of the third group of astronauts selected by NASA, was the Lunar Module pilot on the first manned Apollo mission, Apollo 7, an 11-day Earth-orbit flight in October 1968.

He was born in Creston, Iowa, on March 16, 1932. He received a Bachelor of Arts degree with honors in physics in 1960 and a Master of Arts degree in physics in 1961 from the University of California at Los Angeles. He worked as a scientist with the RAND Corporation before becoming an astronaut. He attended the Advanced Management Program, Harvard School of Business, in 1974.

Cunningham joined the Navy in 1951 and began flight training in 1952. He joined a Marine squadron in 1953 and served with the Marine Corps until 1956 and in the Marine Corps Reserve program until 1975. He holds the rank of Colonel, USMC (retired).

NASA selected him as an astronaut in October 1963, and on October 11, 1968, he, Commander Walter Schirra and Command Module pilot Donn Eisele were launched aboard Apollo 7 – a spacecraft that had been almost completely redesigned after the first Apollo crew died in the Apollo 1 launch pad fire on January 27, 1967. The 260-hour, 4 1/2-million-mile flight was a complete success and provided NASA with confidence to send the next Apollo crew, Apollo 8, into orbit around the moon.

Cunningham retired from NASA in 1975 and two years later, a book about his experiences as an astronaut, “The All American Boys,” was published by Macmillan. He currently is president of Acorn Ventures, Inc., Houston. Cunningham serves on the Board of Directors of the Astronaut Scholarship Foundation.

Walt Cunningham was inducted into the U.S. Astronaut Hall of Fame on October 4, 1997.