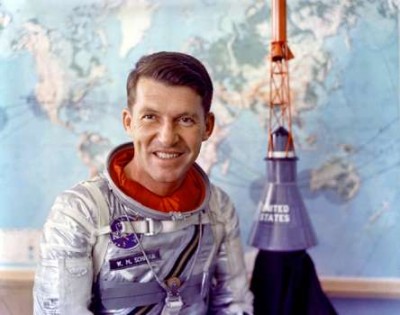 Walter M. Schirra, one of America’s original Mercury Seven astronauts, is the only one who flew in all three of the nation’s pioneering space programs, Mercury, Gemini, and Apollo.

He was born in Hackensack, N.J., on March 12, 1923. He graduated from the United States Naval Academy in 1945 and from Naval Flight Training at Pensacola Naval Air Station, FL, in 1947. He served as a carrier-based fighter pilot and operations officer and then attended the Naval Test Pilot School at Patuxent River, Md. During the Korean War he flew F-86 Sabres as an exchange pilot with the U.S. Air Force.

Schirra was selected by NASA as one of the original seven Mercury astronauts in 1959. He flew on the fifth Project Mercury flight, orbiting the earth in his Sigma 7 capsule six times in 9 hours 13 minutes on Oct. 3, 1962. He conducted experiments and snapped hundreds of pictures of earth and space phenomena.

Schirra commanded Gemini 6, flying with astronaut Tom Stafford. They were to have tracked down and docked with an Agena satellite, but the Agena exploded after liftoff on Oct. 25, 1965. The flight plan was changed, calling for Gemini 6 to rendezvous with Gemini 7, a 14-day flight manned by Frank Borman and James Lovell. Gemini 7 was launched Dec. 4, 1965. Gemini 6 was to take off Dec. 12 bit was aborted when the Titan 2 booster rocket engine shut down after ignition. Three days later, Schirra and Stafford were launched. They caught up with Gemini 7, flew formation with it, as close as one foot, for five hours before separating and returning to earth the next day.

Schirra was back in space again on Oct. 11, 1968, as commander of Apollo 7, the first manned flight of the Apollo craft designed to carry astronauts to the moon. During 11 days in earth orbit, he and crewmates Walt Cunningham and Donn Eisele successfully checked all the Apollo systems, qualifying the spacecraft for moon missions.

Captain Schirra retired from the Navy and NASA in 1969 to enter the business world. He served as an officer and director of several companies and eventually formed his own consultant company, Schirra Enterprises.

Wally Schirra was inducted into the U.S. Astronaut Hall of Fame on May 11, 1990.