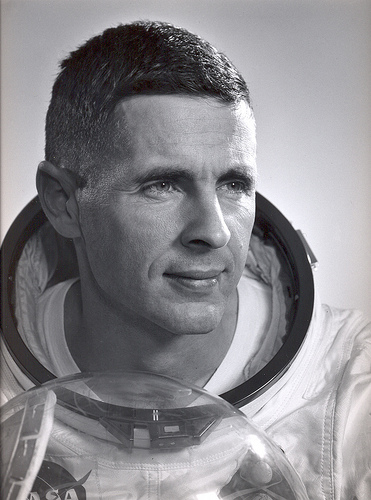 William  A. Anders was a member of the first crew of astronauts to break away from Earth’s gravity to orbit the Moon on the Apollo 8 mission at Christmas-time 1968.

Anders was born October 17, 1933, in Hong Kong. He received a Bachelor of Science degree from the U.S. Naval Academy in 1955 and after graduation was commissioned in the U.S. Air Force, serving as a fighter pilot in all-weather interception squadrons of the Air Defense Command. He received a Master of Science degree in nuclear engineering from the Air Force Institute of Technology and was assigned responsibility for technical management of nuclear power reactor shielding and radiation effects programs at the Air Force Weapons Laboratory. He retired at the rank of major general in the Air Force Reserve.

NASA selected Anders to be an astronaut in 1964. He received his first flight assignment as a member of the Apollo 8 crew, along with two Gemini veterans, Commander Frank Borman and Jim Lovell. On December 21, 1968, Apollo 8 became the first manned ship to leave Earth orbit as it streaked toward the first human mission to the moon. Early on Christmas Eve, the astronauts braked into lunar orbit and, in breathless terms, described the desolate, cratered and beautiful landscape just 60 miles beneath them. In a Christmas Eve message to the world, Anders, Lovell and Borman read the story of creation from the first 10 verses of the Bible’s Book of Genesis. Humans listened entralled, while watching a vivid televised image of the moon’s surface. Anders took the first “Earth Rise” picture which was commemorated on a U.S. postage stamp. On Christmas Day, Apollo 8 fired out of lunar orbit and sped back toward Earth and a perfect landing in the Pacific Ocean on December 27.

Anders left NASA after that  mission and from 1969 to 1973 he served as executive secretary of the National Aeronautics and Space Council. In 1973 he was appointed to the Atomic Energy Commission. Following reorganization of national nuclear regulatory and development activities in 1975, Anders was named by President Ford to become the first chairman of the new Nuclear Regulatory Commission. Ford later named him U.S. ambassador to Norway.

Anders left the federal government after 26 years service in 1977 and assumed a series of management positions with the General Electric Company and Textron, Inc.. He later was chairman and CEO of the General Dynamics Corporation before retiring in 1996. Anders is president and director of The Anders Foundation, a philantropic organization, and the owner of his air racing aircraft, Apogee Flight. He also established the Heritage Flight Museum to preserve and display historic and flyable military aircraft.

William Anders was inducted into the U.S. Astronaut Hall of Fame on October 4, 1997.