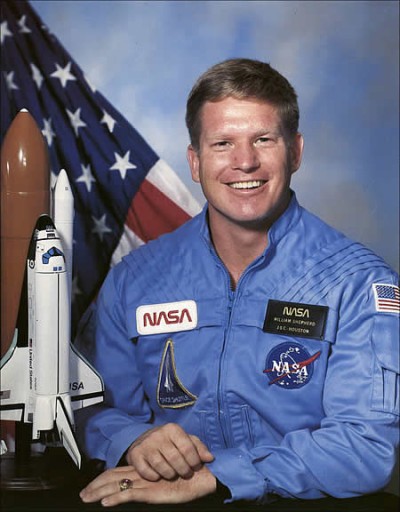 William Shepherd completed three flights as a mission specialist on STS-27 Atlantis, STS-41 Discovery, and STS-52 Columbia, and was the commander of the Expedition-1 crew on the International Space Station.

Shepherd was born July 26, 1949, in Oak Ridge, Tennessee. He received a bachelor’s degree in Aerospace Engineering from the U.S. Naval Academy in 1971, and an Ocean Engineer degree and master’s in Mechanical Engineering from the Massachusetts Institute of Technology in 1978.

Shepherd was selected for the NASA astronaut corps in 1984. His Navy SEAL training proved exceptionally useful as he participated in salvage operations of the Space Shuttle Challenger after its destruction. Shepherd has logged over 159 days in space, serving as a mission specialist on three space shuttle flights.

During the 1988 classified military mission STS-27, the five-person Atlantis crew released a radar satellite and performed experiments aimed at defining a human’s role as a military observer in space.

The STS-41 Discovery deployed the Ulysses probe during a four-day mission in 1990.

The crew of the STS-52 Columbia mission deployed the Laser Geodynamic Satellite II and operation of the U.S. Microgravity Payload-1.

In 1993, Shepherd was assigned to program management for the International Space Station. From October 31, 2000, to March 21, 2001, he and Russian cosmonauts Yuri Gidzenko and Sergey Krikalev served as Expedition 1, the first crew stationed at the ISS. In 2003, he was awarded the Congressional Space Medal of Honor.

William Shepherd was inducted into the U.S. Astronaut Hall of Fame on May 2, 2009.