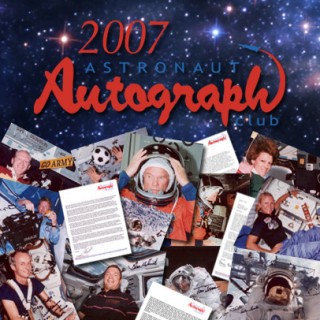 Join today and you (or the person whom you designate) will receive a letter from such notable astronauts as first female commander Eileen Collins, Mercury original-turned U.S. Senator-turned shuttle astronaut at 77, John Glenn, and Hubble Space Telescope spacewalker Kathy Thornton! In total, your club will consist of 12 astronauts  personalized letters and authentically-autographed 8″ x 10″ photographs from hero astronauts.

You will also receive a handsome box with archival sleeves to protect, store, and display your growing collection of astronaut photos and correspondences.

In addition to those named above, participating astronauts in 2007 include:

Membership is only $599 for the year. The club is limited to just 350 members.

Each autographed item is unique and the signatures on the items you receive may differ slightly from those on the examples shown here.