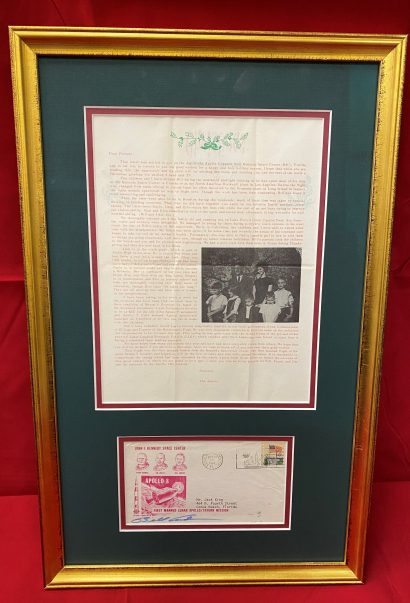 Consists of an original copy of the Anders’ family Christmas letter sent out on the day of Bill Anders’ Apollo 8 launch – Man’s first trip to the Moon!  The letter, apparently written by Mrs. Anders, talks about family matters, what the children have been doing, vacations, Bill’s heavy work schedule, etc.  It references Anders flying the LLTV to simulate lunar landings, the flight of the vehicle during which Neil Armstrong was forced to eject, and the family’s pride in the upcoming Apollo 8 mission. It closes as follows, “I know you join me in my prayers for Bill, Frank, and Jim and the success (of) the Apollo VIII mission.”

The letter has been framed along with the original mailing envelope, postmarked at the Kennedy Space Center, FL for the Apollo 8 launch.  This particular letter was mailed to the home of Jack King, “The Voice of Apollo.” The cached envelope, which was sealed for mailing and subsequently opened, bears a vintage autograph of Bill Anders.

Appropriately framed using archival materials, this would be a space lover’s dream of a Christmas present!

A member of the ASF team will contact you for shipping and insurance costs once the auction is closed.