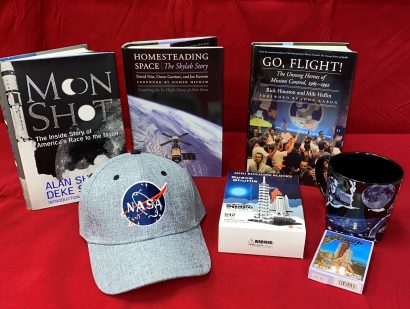 Hardbound edition of the book, Moon Shot, by Alan Shepard, Deke Slayton, Jay Barbree and Howard Benedict ASF’s first Executive Director, from the personal collection of and signed by Apollo Astronaut Gene Cernan – the last man on the Moon.

A NASA ball cap, a souvenir Apollo mug, Nasa playing cards and a Space Shuttle with launch pad for you to build from mini building blocks.

A member of the ASF team will contact you for shipping and insurance costs once the auction is closed.