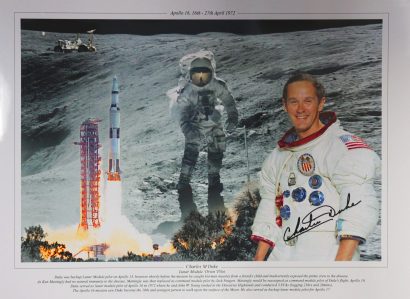 Astronaut Charlie Duke signed this print collage which features several photographs from his Apollo 16 mission. In the foreground is Duke’s official NASA portrait against the background of a Saturn V rocket lifting off and an image of him on the moon with the lunar rover.

At the bottom of the print is text which reads:

Duke served as lunar module pilot of Apollo 16 in 1972 where he and John W. Young landed at the Descartes Highlands and conducted 3 EVAs (logging 21 hrs and 28 mins). The Apollo 16 mission saw duke become the 10th and youngest person to walk upon the surface of the Moon. He also served as backup lunar module pilot for Apollo 17.

Duke has signed a limited number of these prints exclusively for the Astronaut Scholarship Foundation. The print is accompanied by a certificate of authenticity.

Each autographed item is unique and the signature on the item you receive may differ slightly from the example shown here.

All monies raised from the sale of these prints will go directly to fund scholarships, through the Astronaut Scholarship Foundation, for exceptional college students pursuing advanced degrees in science or engineering. For more information, please visit AstronautScholarship.org.