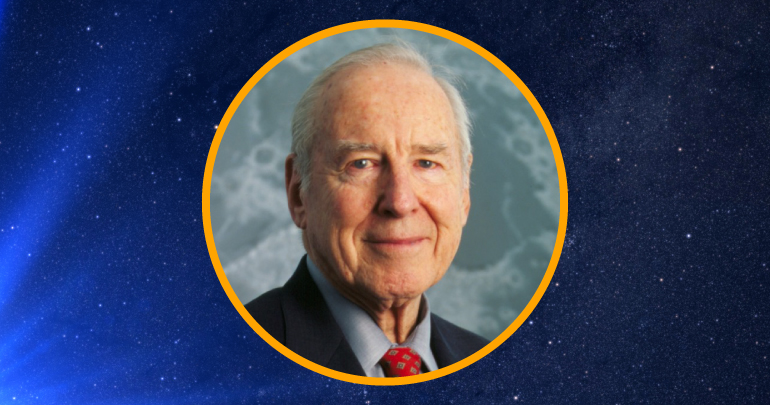 He was born in Cleveland, Ohio, on March 25, 1928. He attended the University of Wisconsin, received a Bachelor of Science degree from the United States Naval Academy in 1952 and completed the Advanced Management Program at Harvard Business School in 1971.

Lovell attended the Test Pilot School at the Naval Air Test Center, Patuxent River, Md., and spent four years at the center as a test pilot, serving as program manager for the F4H Phantom Fighter. He graduated from the Aviation Safety School of the University of Southern California and was assigned as safety engineer with Fighter Squadron 101 at the Naval Air Station, Oceana, Va.

He was selected as an astronaut by NASA in 1962. On Dec. 4, 1965, he and Frank Borman began a then-record 14-day space trip in Gemini 7. During the flight, Gemini 6 astronauts Wally Schirra And Tom Stafford were launched and executed the first rendezvous in space of two manned spacecraft, with the two ships maneuvering to within one foot of each other. The Gemini 12 mission with pilot Buzz Aldrin began Nov 11, 1966, and featured a linkup with an Agena satellite and a space walk by Aldrin. The flight was the final in the Gemini series.

Lovell and Borman were back in space again, with Bill Anders, on Dec. 21, 1968, on Apollo 8, man’s maiden voyage to the moon. This was the first crew to be launched by the giant Saturn V rocket. Borman, Lovell and Anders orbited the moon on Christmas Eve and captivated a television audience of millions by beaming pictures of the rugged lunar surface while reading from the Bible’s Book of Genesis. Lovell was on his way to the moon again, this time to make the Apollo program’s third landing there, on April 11, 1970. But as Apollo 13 neared the moon, an oxygen tank in the Service Module ruptured and he and crewmates Jack Swigert and Fred Haise had to battle for more than three days to get safely back home. With most of their Command Module power gone, they worked with ground controllers to convert their still-attached Lunar Module into a “lifeboat”. By conserving electricity and other supplies, they made it back to earth after a hair-raising six-day trip.

Lovell and co-author Jeffrey Kluger wrote about the Apollo 13 adventure in “Lost Moon,” published in 1994 by Houghton Mifflin. The book became a major motion picture in the summer of 1995. Titled, “Apollo 13”, it starred Academy-Award-Winner Tom Hanks as Lovell. It was directed By Ron Howard and released By Universal Studios.

Lovell retired from the Navy in 1973 with the rank of captain and entered the business world. Today he is president of his own company, Lovell Communications. He and his wife, Marilyn, live in Lake Forest, Illinois.