Through a partnership with The Purdue Research Foundation, the Armstrong Family and Neil Armstrong’s friend, Jim Hays, ASF recognizes an Astronaut Scholar Alum who exemplifies personal character and professional achievement, and their work leaves an impact in their field. The nominating criteria embody Neil Armstrong’s core values and those of his colleagues, the Mercury, Gemini, Apollo, Skylab, Space Shuttle and International Space Station astronauts.

The Astronaut Scholarship Foundation is proud to announce that its 2020 Neil Armstrong™ Award of Excellence Honoree is Christina H. Koch, a 2000 and 2001 Astronaut Scholar from North Carolina State University. 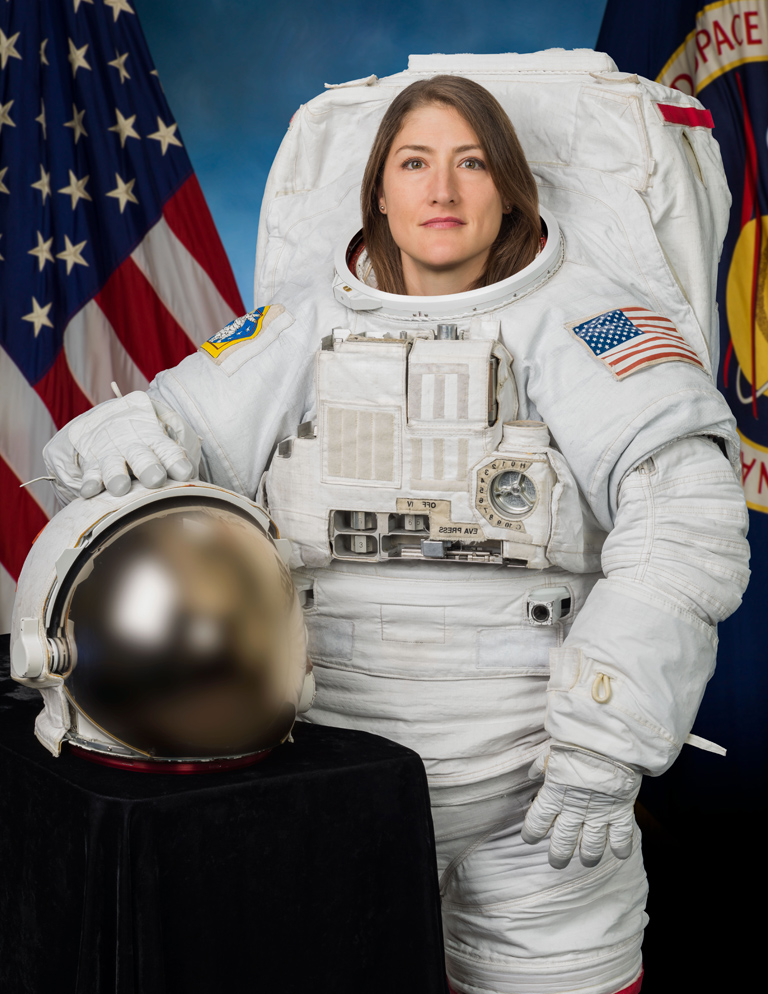 Christina Koch, a NASA astronaut who returned to Earth after the longest-ever single spaceflight by a woman, was an ASF scholarship recipient in 2000 and in 2001, while she was attending North Carolina State University (NCSU).

Christina Koch, the first Astronaut Scholar selected as a NASA Astronaut was one of eight candidates in the 2013 Astronaut Class. She launched on her first spaceflight to the International Space Station on March 14, 2019. While aboard the ISS, Christina and Jessica Meir completed the first all-female spacewalk. With 328 days in space and 5,248 orbits of the Earth, Christina currently holds the record for longest single spaceflight by a woman and the second longest flight by a U.S. astronaut. During her record-setting mission, Koch participated in more than 210 investigations, helping advance NASA’s goals to return humans to the Moon under the Artemis program and prepare for human exploration of Mars. Koch participated in a number of studies to support those future exploration missions, including research into how the human body adjusts to weightlessness, isolation, radiation and the stress of long-duration spaceflight. Koch participated in the vertebral strength investigation, which better defines the extent of spaceflight-induced bone and muscle degradation of the spine, and the associated risk for broken vertebrae. This research also benefits society because it may identify preventative medical measures or exercise to improve bone health for Earth’s citizens. In the microgravity crystals investigation, Koch experimented with protein membranes to support development of more effective cancer treatments. Working inside Japan’s Kibo laboratory, Koch monitored the test of a free-flying robotic assistant designed to perform crew monitoring, as well as take environmental samples and assist logistics management on the orbiting laboratory. She also ran a set of five independent studies of combustion in microgravity with the goal of improving fuel efficiency, reducing pollutant production in combustion on Earth and preventing spacecraft fires.

Christina’s perseverance to become a NASA Astronaut was without limit. She has worked in remote research labs in frigid Barrow, Alaska, and tropical American Samoa. Her experience in austere environments includes a winter-over season at Amundsen-Scott South Pole station where she also served as a member of firefighting and glacier search-and-rescue teams. Christina also worked at NASA Goddard Space Flight Center’s Laboratory for High Energy Astrophysics, where she contributed to the development of scientific instruments on several NASA missions studying cosmology and astrophysics for the Juno and Van Allen probes. As an inventor, she developed an algorithm for starting micro turbo-molecular vacuum pumps to be used in science instruments on a future Mars rover. In her spaceflight training, Christina learned to co-pilot the T-38, trained to be an aircraft commander in a T-6, and learned to speak Russian.

To prepare for her long duration spaceflight, Christina had to overcome psychological and physical challenges common to all Astronauts. Her experience in remote environments like Antarctica prepared her for isolation, but Christina cultivated relationships with family and friends to endure one of the longest missions on record. Also, the intense physical demands of ISS spacewalks – the metabolic equivalent of running a marathon – required intense physical training. In the first all-female spacewalk, Koch and Meir spent more than seven hours outside the station to fix a battery component in the ISS power system. In total, she spent 42 hours and 15 minutes across six spacewalks.

As the first Astronaut Scholar to be selected as a NASA Astronaut, Christina’s pursuit of excellence not only inspires her fellow scholars but women everywhere. As NASA pursues the Artemis program to land the next man and first woman on the moon, this record-setting Astronaut is a favored candidate to take the next lunar footsteps. When asked about this possibility, Koch told the press, “Any of us would be ready and honored to accept that mission if it were offered to us.”

Born in Grand Rapids, Michigan, and raised in Jacksonville, North Carolina, Koch graduated from NCSU with a Bachelor of Science degree in electrical engineering and in physics in 2001, and with a Master of Science in electrical engineering in 2002. After completing her education, Koch moved to Houston, Texas to join the NASA Astronaut Corps and concluded her astronaut training in 2015. She has remained passionate about technical instructing, volunteer tutoring and educational outreach throughout her career, and most recently, she earned an Honorary Ph.D. from North Carolina State University.

Note: Submitting a nomination/application does not guarantee an award.

For more information about the Neil Armstrong™ Award of Excellence, contact us at +1 407-362-7900 or info@astronautscholarship.org.