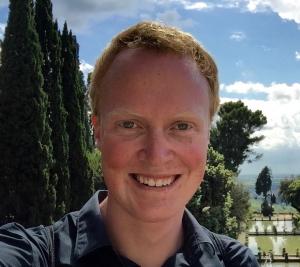 Astronaut Scholar Matthew Hurst, class of 2016, was the prototypical youngster who thought engineering was “cool.”  Today, he is one of the “Tomorrow’s Engineering Leaders: The 20 Twenties to watch,” according to the American Institute of Aeronautics and Avionics (AIAA), and Aviation Week magazine.

“I’ve always been interested in problem solving, the classic kid interested in engineering,” Hurst said. “In high school and college, I knew I wanted to do engineering. I’ve always had a fascination with planes and space. I’ve moved from thinking they were cool as a kid to wanting to understand it as an adult.”

The work cited in Hurst’s “20 Twenties” award is his technical research into the applications of multiple-fidelity modeling in airfoil design and analysis. This is the same research he was working on at the University of Colorado Boulder when he became an Astronaut Scholar. A double major in applied math and aerospace engineering at Boulder, he has expanded his body of work to include a year-long capstone project—a light detection and ranging (lidar) based scanning system for extraterrestrial spacecraft landing.

“We have complex physical problems in aerospace and we want to find accurate solutions,” Hurst said. “As engineers, we want to know what’s going to happen to an aircraft in a lot of different configurations.” His research leverages both high-fidelity and low-fidelity models to provide accurate data as quickly as possible.

According to Aviation Week, the award recognizes those young engineers who will “change the world.” Through a collaboration with AIAA and universities around the world, 20 undergraduate or master’s degree students are on a path to do just that.

Hurst touts the opportunity to meet with some of his personal heroes as well as “current leaders of this industry” as one of the many benefits of academic recognition such as this. Through the Astronaut Scholar program, Hurst has developed a mentoring relationship with former astronaut, Kent Rominger.

“I was blown away by who he is – a shuttle astronaut, Top Gun graduate – and I’ve had the opportunity to talk with him on the phone a couple of times. It’s been awesome to have the chance to talk to him, someone who is a personal hero of mine.”

For the next two years, Hurst will attend graduate school at University College London on a Marshall Scholarship and continue his studies in mathematical modeling. For Hurst, he says that “ultimately it comes down to being passionate about learning. I never want to lose my love for learning, as I continue my education and then begin a career to solve problems and make a positive impact on this industry.”